Is new and modern technology really superior to old technology? I will compare the Casio F-91W watch to the Xiaomi Mi Band 2.

I was inspired to write this post by a 2015 article by TheNextWeb about the Casio F-91W.

Before I begin, I would like to say that this comparison is not fair at all, as these devices have very different functions and are meant for different people.

So without further a do, lets go! 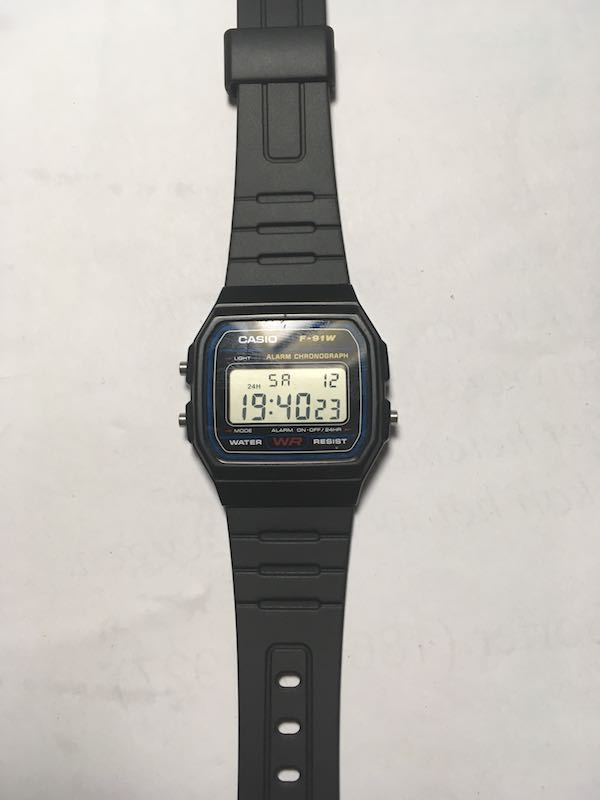 It is the world’s first affordable and mass-produced digital watch. It is very accurate (accurate to within 30 seconds a month), has a battery life of 7 years and has many more features (more on that later). But most importantly: It’s extremely reliable.

This watch has an incredibly thrilling history: It has been frequently used by terrorist (yes, even Osama Bin Laden wore it), because it could be easily used by bomb-makers. It has been worn by everyone, from hipsters to Barack Obama. 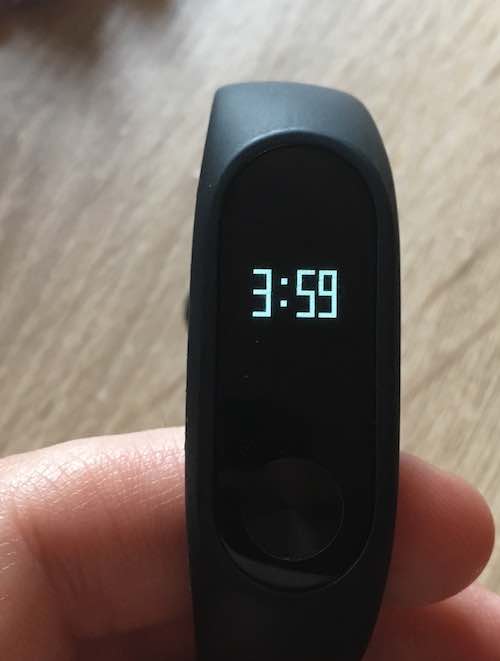 The Xiaomi Mi Band 2 is a fitness and activity tracker, launched by Xiaomi in 2016. It is similarly priced to the Casio F-91W, and has also a rich feature-set.

Hence, I chose it for this, rather unorthodox comparison.

Here a quick and unambiguous overview of the features of both devices.

Features of the Xiaomi Mi Band 2

The Xiaomi Mi Band 2 is mainly a fitness tracker. It has a motion sensor, can track your steps, can monitor your heart rate, has a sleep tracker. On it’s small OLED screen it can display the time (that’s a really handy feature) and the date, amount of steps, distance, heart rate.

It connects to your phone via Bluetooth (on Android it can be used to unlock your phone) and can display the kind of notification (for example it can show an icon for Instagram, Facebook etc.). Also it can vibrate, and shows incoming calls.

It has one button, with which you can scroll through the various functions.

By a flick of the wrist (which doesn’t work when you really need it) it can turn on the display (which is off, most of the time, to save battery).

By the way, the battery can last easily a month, and can be just as easily recharged.

It should be noted that the Xiaomi Mi Band 2 doesn’t need to be connected to the phone the whole time, it works just fine without it. But from time to time you should connect it to sync it.

So, as a matter of fact, you do need your phone.

Last but not least, it is water resistant (IP67).

Features of the Casio F-91W

The Casio F-91W is mainly a watch (as opposed to a fitness tracker) so it mainly shows the time. It has an always on display, on which you can read (at one glance, mind you) the time (hours, minutes AND seconds) the day of the week and date (day).

Using the buttons you can read the full date.

The Casio F-91W has a stopwatch and Alarm function, for which you don’t need any phone with a bluetooth connection at all. It has an option to beep every hour and has a light for the display.

Also, you can switch between 12h and 24h modes.

The battery last seven years, and the watch is water resistant (I didn’t find any IP rating, but it seems pretty reliable).

It should be noted, that the time and date have to be set manually.

Now that we have the technical stuff out of the way, I can finally move to my opinion.

Both devices are comfortable to wear, although the Casio F-91W is thinner (and a tiny bit lighter), which makes it, in my opinion, a little more comfortable and feel less bulky than the Xiaomi Mi Band 2. 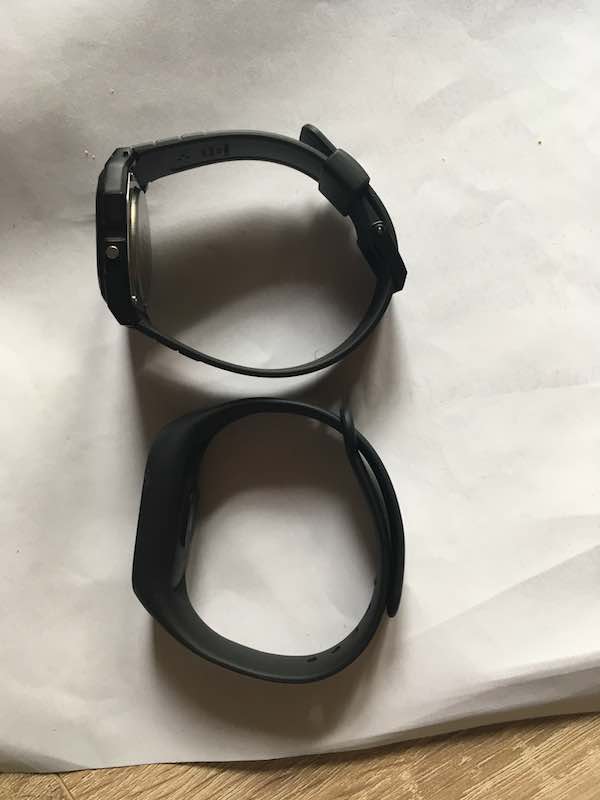 That said, some might prefer the Xiaomi Mi Band 2 as it’s much cleaner and there isn’t any text, which makes it much more modern-looking. 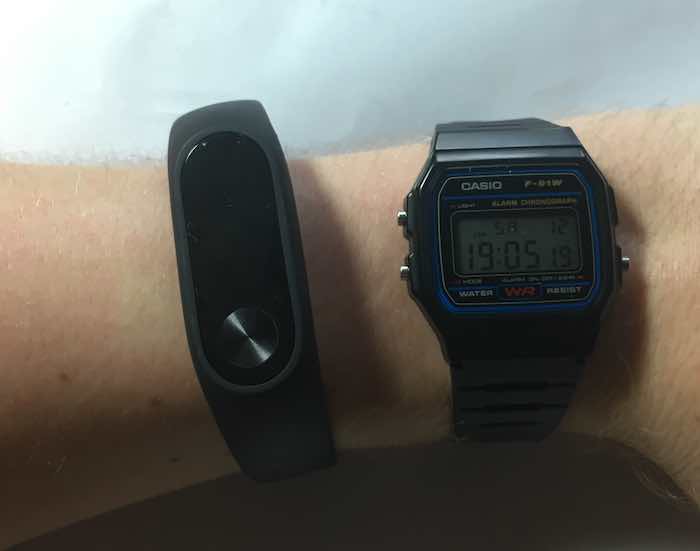 Now I am moving to the essence of this blog post. And ultimately it all comes down to what you really need and what you expect from a wearable.

For my, part I can say for sure, that I prefer the Casio Watch. For one, you don’t need to worry about charging it or syncing it with your phone.

However, most importantly, it is build for time, and that task it fulfils perfectly. You don’t need to flick your wrist or push a button (for which you will need a second hand:) just to view the time and date.

Of course, the Xiaomi Mi Band 2 can do much more, but it has also compromises. Sure, it is a fitness tracker (which the Casio isn’t) AND it can tell the time and date. But at the same time, I noticed that it didn’t really make my live easier: Every time I need to know the time I need to push a button, every month I need to recharge (but that is not such a big deal); if I want to set a quick alarm or even use a stopwatch I need to pull out my phone.

And with the Casio watch I don’t need to.

Of course, you will say, the Xiaomi Mi Band 2 is about fitness, and I agree with you. However, I, personally, can do sports without a fitness tracker, and don’t give such a big deal about amount of steps or something like that.

However, as a tech guy I have to admit, that the Xiaomi Mi Band 2 can offer much more than the official specifications, if you use a custom (android) app. Potentially, you could mod the firmware, and there are much more possibilities than the Casio F-91W.

But even the Casio F-91W can do surprisingly much, as terrorist (unfortunately) even used it to build bombs and plan terrorist attacks. But that is nothing to be proud about.

Last but not least, I like stuff that is easily repairable, and in these terms the Casio F-91W also scores higher. 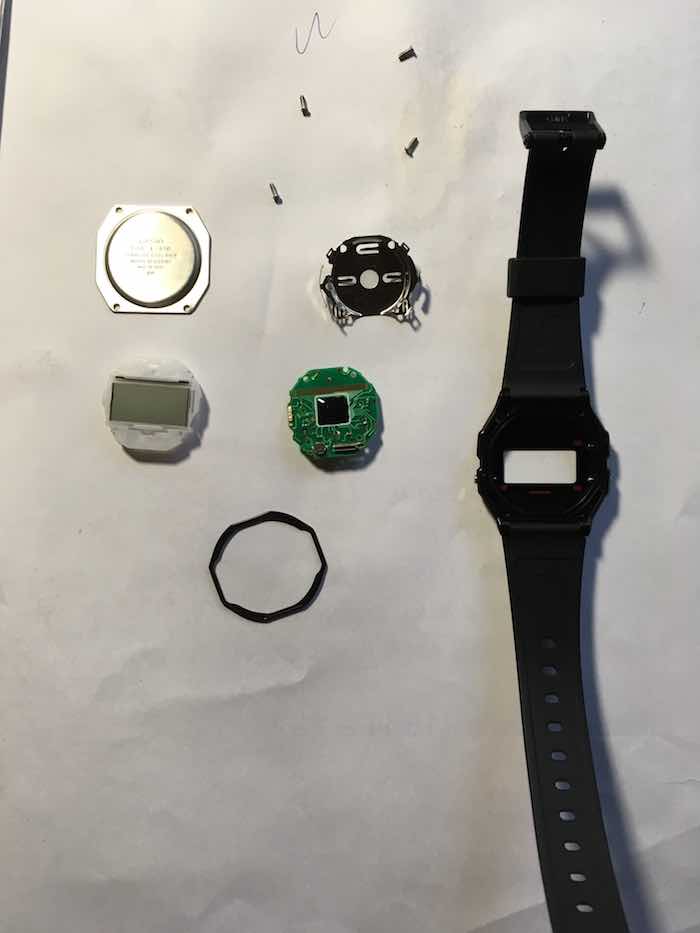 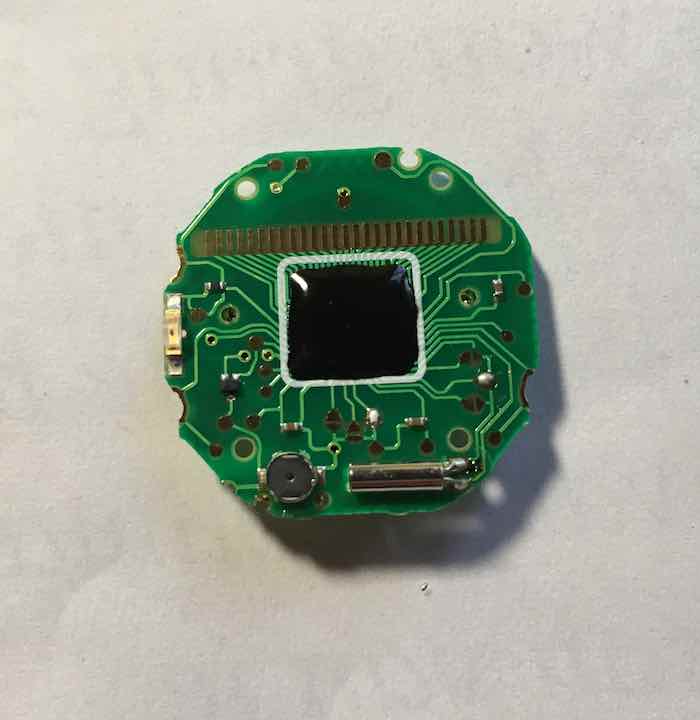 As I have already stated in the beginning this comparison isn’t fair at all. However, these are both devices, which are meant to be worn on the wrist, and from that point of view it does makes sense to think about what option would suit you better.

The Xiaomi Mi Band 2 is a fantastic product, it can really do a lot of things, especially if you own an android phone.

However, keep in mind that all your data is shared with Xiaomi, and if privacy is important to you, you should think twice.

I did some network traffic analysis, piping all the network traffic from my phone, trough a proxy on my computer. You will be really surprised seeing the amount of data shared, the moment you open the app. But that doesn’t apply only to Xiaomi…

Perhaps, in the future, I will dedicate another blog post to that - it is a really interesting topic.

The Casio F-91W is a much more simpler product. It can only do a few things, but does these things very reliably and will never let you down.

It has a really rich history and is already a kind of legend.

As the NextWeb puts it:

And that’s what I like about it. It will only be getting better with time.

Oh yeah, and it doesn’t share your personal data to unknown who.

Ultimately, it is a personal choice for everyone.